Two young fish meet an older fish, who nods at them and says, “Morning, boys. How’s the water?” The two young fish swim along, and one turns to the other and says, “What the heck is water?”

A month – and year – to forget

Sometimes we ignore the most important things. We are in a similar period in the financial markets. For our purposes:

A month – and year – to forget

Specifically, the Federal Reserve introduced ‘easy’ money policies to stabilize markets after the Global Financial Crisis of 2008. The Fed then kept them in place far longer than originally intended, pumping money into the system and keeping interest rates generationally low. These policies went into overdrive during the pandemic, as illustrated in the chart below.[2] 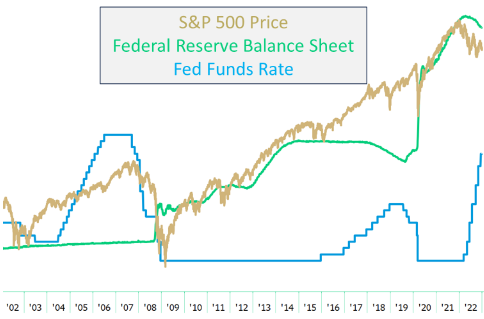 After the Financial Crisis, the Fed:

Company profits and stock returns roared in the 15 years following the Financial Crisis. The S&P 500 earned 16% from the end of 2008 through the end of 2021—significantly above the long-term average of 10%.[3]

This was “water”: the important reality that propelled financial markets.

In 2022, the Fed changed the environment; it has begun to reduce its balance sheet and has undertaken its most aggressive tightening cycle since the 1970s, in terms of speed and amount of tightening. This drove markets down in 2022. The S&P 500 finished the year down 18%, and balanced portfolios experienced their worst year since the 2008 GFC.[4]We’ll talk about what this means for the future in our outlook, but first let’s review December’s performance. 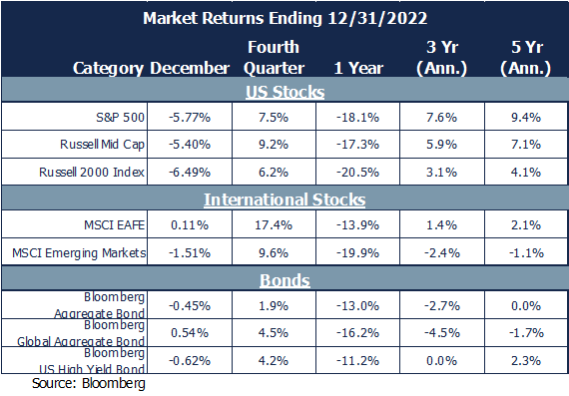 Review of Our Navigator Process

Valuation: The silver lining of 2022’s dismal performance is that valuations for both stocks and bonds are far more attractive than a year ago. The chart below[5]shows a 25-year history of the S&P 500 P/E ratio alongside the Yield of the Bloomberg Barclay’s Aggregate Bond Index. A couple points to note:

1) Stock valuations are back to their averages of the last 25 years but are still higher than long-term averages. Other valuation measures tell a similar story; stocks were very expensive and have become – if not cheap – less expensive.[6]

2) The yield on bonds has become far more attractive than just a year ago. In fact, bonds yield more now than at any time since the Global Financial Crisis.

We are far more excited about our investment portfolios than we were a year ago.

That is probably not how you feel, is it? What’s important today are the prospects of future returns. Valuations tell us they are decent – not yet back as high as historical averages, but optimistic for the long-term investor.

There are two caveats, however. First, when stocks and bonds are very expensive, they go back to average, as they are now. But, when they revert, they dip below average. Don’t be surprised to see more downside. Focus on the long-term. 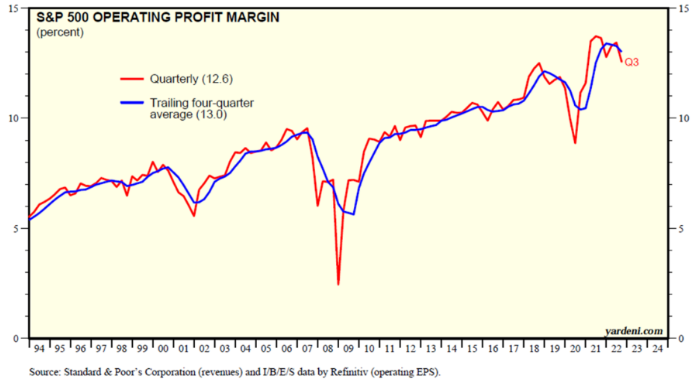 Economy: The second caveat is that earnings may decline. We have been monitoring earnings, specifically profit margins. The chart on the right[7]illustrates that profit margins may be returning to their averages after earning higher returns than normal during the post-COVID expansion.

Inflation is less concerning than it has been. However, the consensus is that a recession is likely.

Technicals: Short-term measures have begun to show some fatigue during the strong returns the first couple weeks of January, but medium- and long-term indicators are neutral to positive.

Sentiment: Investor sentiment has been negative since the summer, and this contrarian indicator, combined with recovering consumer sentiment, is positive.

Outlook: The Chicago Cubs teach Reversion to the Mean 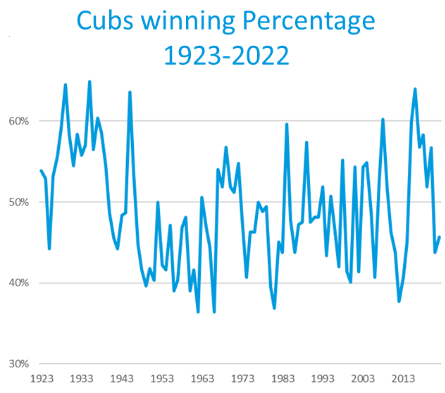 The Chicago Cubs have always been an average team – their 100-year winning record is 49.1%.

In 2016, however, they had a 64% winning percentage on the way to capturing the World Series. The six seasons since have brought long-suffering Cubs fans an illustration of reversion to the mean, as their winning percentage has fallen back below .500.

Mean reversion is also a powerful force in the investing world, affecting profit margins and valuation differences between asset classes.

The profit margins shown near the beginning of this article seem to be steadily going up, but at a pace which bounces around. After peaking last year, margins have been down for the last 5 quarters. This guides us to a conservative view of corporate earnings growth and equity returns, consistent with a slowing economy.

Valuation also tends to revert to the mean on an upward sloping trajectory.

The top part of this 25-year chart shows valuations[8]of US and international stocks. Both times US markets reached their most expensive levels – during the tech bubble of 2000 and during the Pandemic recovery – relative valuations returned to their long-term relationships.

What is an investor to do? Here is a game plan for today’s environment:

Maintain discipline: At the same time, pay attention to investments which may be at risk if the economy goes into recession. Move toward a more even balance between your allocation to growth and value stocks. Evaluate risk in your portfolio and use the market’s rise to rebalance if the ride has been too volatile this year.

[8] Source:  I have chosen to show Price/Sales ratio, rather than P/E. P/S is a less volatile measure; during the financial crisis of 2008 the P/E ratio was quite volatile.

This material is intended to be educational in nature, and not as a recommendation of any particular strategy, approach, product or concept for any particular advisor or client. These materials are not intended as any form of substitute for individualized investment advice. The discussion is general in nature, and therefore not intended to recommend or endorse any asset class, security, or technical aspect of any security for the purpose of allowing a reader to use the approach on their own. Before participating in any investment program or making any investment, clients as well as all other readers are encouraged to consult with their own professional advisers, including investment advisers and tax advisors. OneAscent can assist in determining a suitable investment approach for a given individual, which may or may not closely resemble the strategies outlined herein.