Risk assets generally fell in September as investors continued to monitor the COVID-19 global pandemic and its economic impact.  The S&P 500 lost 3.8% during the month resulting in a 5.6% gain year-to-date[1].  October will likely be a busy month with significant events like third quarter corporate earnings results and US economic data, as well as the potential for additional stimulus from Washington as the US Presidential election enters its final weeks.

The COVID-19 pandemic has been a significant source of influence across global markets and economies during 2020.  Since mid-summer, the rate of new confirmed cases and fatalities from the virus have begun to flatten and trend down on average across the US.  Economic activity, while still mixed, has begun to improve as well.  Applications for new mortgages, for example, have fully rebounded as low interest rates have spurred demand for home purchases.  However, dining and leisure activities are still sharply lower than 2019. 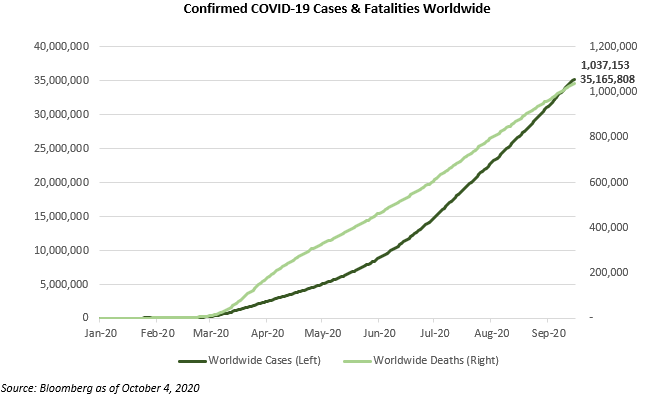 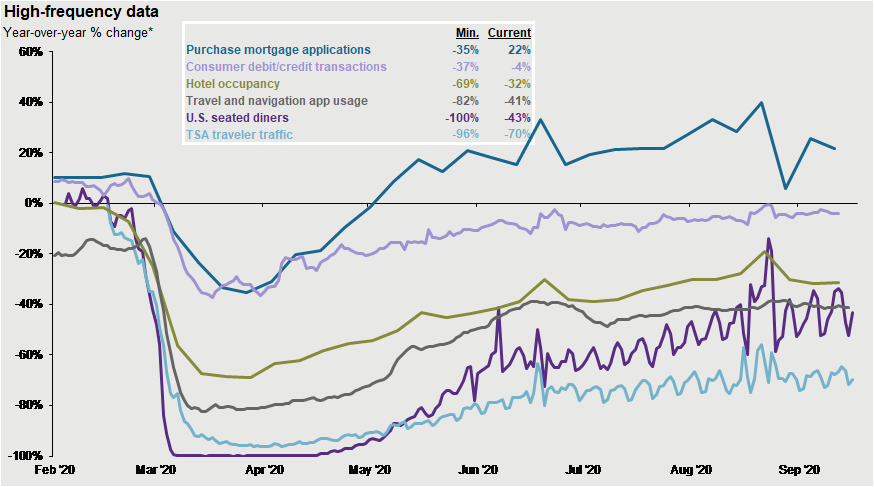 With the US Presidential Election little more than a month away, it appears that Democratic candidate, Joe Biden, has an edge over the incumbent, President Donald Trump.  Biden’s advantage over Trump appears to have increased since the first Presidential debate on September 29 and after news later that week that President Trump contracted the COVID-19 virus and was being treated at Walter Reed Hospital.  Additionally, the odds now imply that Democrats may take control of the US Senate, creating the possibility of Democrats controlling the White House and both chambers of Congress.  Joe Biden has proposed moving the corporate tax rate back to 28% from 21% (down from 35% pre-Trump), which may have an impact on corporate profitability, though the tax receipts are targeted for additional social spending as opposed to simply closing the deficit.

As we enter earnings season, analysts’ consensus estimates for third quarter 2020 S&P 500 index earnings is a year-over-year decline of 21% compared to the third quarter of 2019.  Encouragingly, these expectations increased during the quarter by 4% (from $31.78 to $33.08), which marks the first-time analysts have increased their earnings expectations since the second quarter of 2018.  For the full calendar year of 2020, the consensus expectation is for a decline in earnings of 18%, followed by an increase of 26% in 2021. 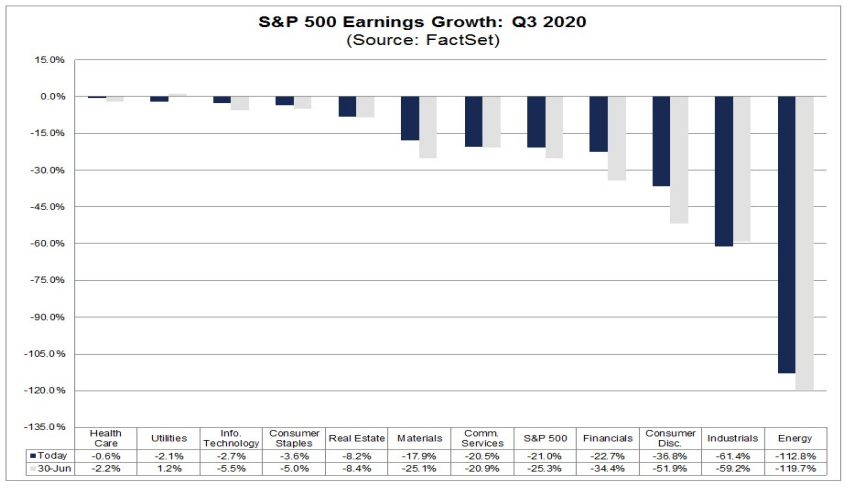 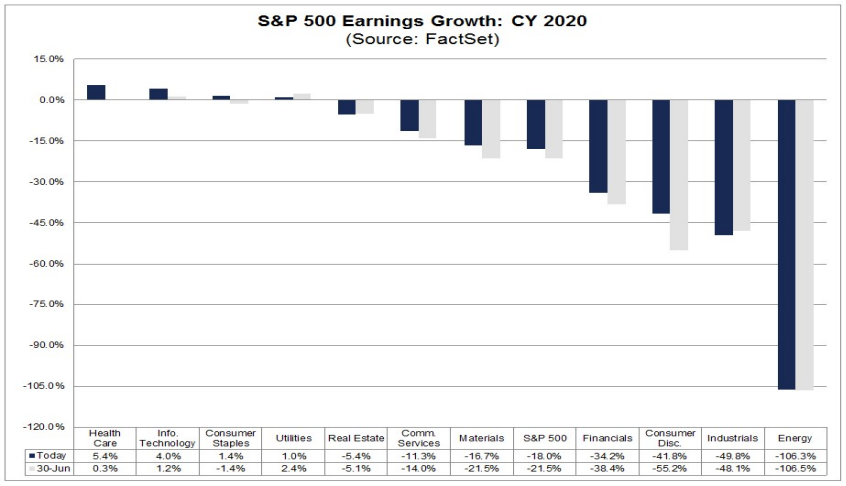 The US employment picture has shown signs of improvement, but is still challenged.  Initial claims for unemployment benefits have been filed by more than 800,000 Americans every week since March, and those filing continuing claims for unemployment benefits totaled nearly 12 million people as of late September.  The US headline unemployment rate stands at 7.9%.  Large companies like airlines and Disney have announced furloughs and layoffs as decreased travel activity have hampered their businesses.  While the US economic recovery remains on track, the longer-term concern would be a broad psychological shift of households and businesses toward financial conservatism over spending as the pandemic has reminded us how quickly revenues and salaries can be cut.

As of this writing in early October, Congress and the White House are still in negotiations for another round of fiscal stimulus, though those talks seem to have slowed as the economic recovery may be gaining momentum.  The House of Representatives passed a $2.2 trillion proposed relief bill that must now be approved through the Senate and the White House.  The Federal Reserve last month reconfirmed their accommodative monetary policy stance by indicating that they will loosen their inflation target to allow for inflation to run above average for a period of time before feeling obligated to begin raising interest rates.  Based on the Fed’s expectations, it is likely that US short-term borrowing rates will remain near zero for at least another year or two. 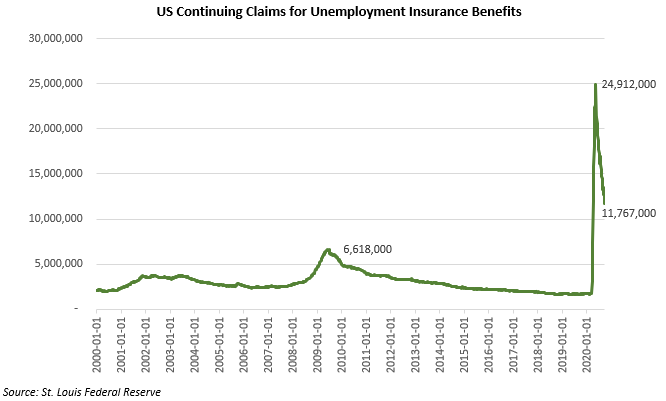 The chart below highlights the valuation of large cap US equities as measured by the S&P 500 index.  These charts imply that the index may be over-extended.  However, given that we have entered an unprecedented period of global fiscal and monetary stimulus, many traditional measured of valuation may not be as meaningful in an extended environment of zero interest rates.  Market participants seem to be looking beyond 2020 earnings and are willing to pay a higher multiple for growth in the recovery years.

We believe that markets today reflect a very positive COVID-19 related outcome and may not appropriately discount for the potential risk that the economic and human toll of the virus drags on longer than expected.  While we are not calling for a significant bear market in risk assets given the backdrop of government accommodation, we do advise investors to be mindful of volatility through periods of uncertainty. 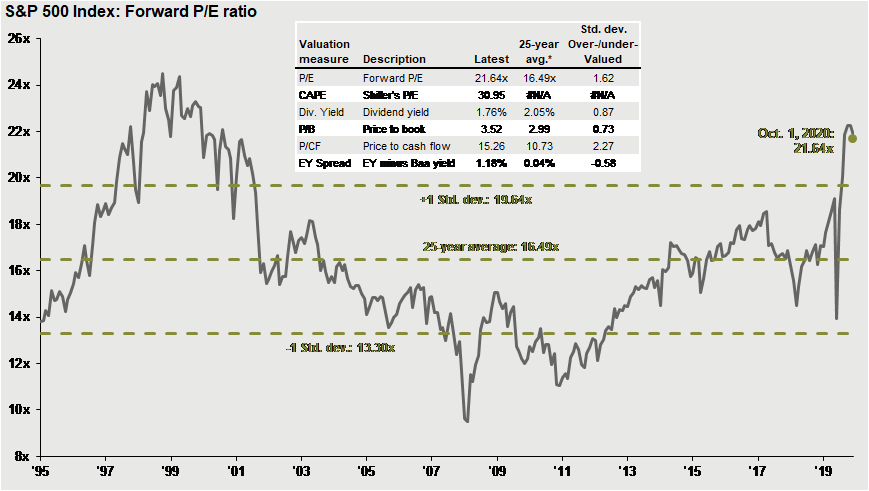 Past performance may not be representative of future results.  All investments are subject to loss.  Forecasts regarding the market or economy are subject to a wide range of possible outcomes.  The views presented in this market update may prove to be inaccurate for a variety of factors.  These views are as of the date listed above and are subject to change based on changes in fundamental economic or market-related data.  Please contact your Financial Advisor in order to complete an updated risk assessment to ensure that your investment allocation is appropriate.